On My Bookshelf: The Ghosts of Chicago, The Windy City’s Most Famous Haunts, by Adam Selzer

I picked up a copy of Adam Selzer’s The Ghosts of Chicago a few weeks ago when I was scouting locations for my upcoming project (Haunted Hotels). 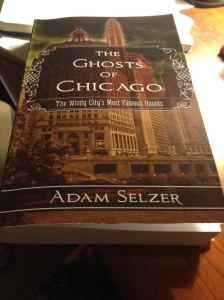 He is absolutely hilarious, which is very hard to be in this genre. I knew I was going to love his book when on page 3 of his Introduction he talked about seeing Scooby-Doo as a kid and thinking “driving around in a van solving mysteries was the way to live.” Don’t we all still think that thought?!

Adam is a tour guide and historian, and I love his explanation for authenticating evidence (pointing out that the official records, newspapers, and even surviving relatives cannot always be relied upon). In addition to educating me, he kept me plenty entertained with his musings about what it is like to ride a bus in Chicago (Page 125: “I sometimes think I must have a sign on my back reading, Tell Me About Judgment Day”). I can so relate to that just about every single time I wind up in the Atlanta Hartsfield Airport.

Here is what Adam had to say about ghost evidence, the famously haunted Congress Hotel, and the rumors about the upcoming season of American Horror Story: Hotel.

I love how you explain to readers in your Introduction that there is no such thing as “good” ghost evidence, only “cool” ghost evidence. Page 11 contains a note to ghost hunters about gear and equipment. Can you elaborate on that a bit for us?

I think most of those gadgets are just toys, at best. More often than not they’re just devices for tricking yourself into thinking you saw a ghost. There’s almost always another possible explanation for photos, sightings, recordings, everything. Equipment readings, that much more. None of this stuff is going to hold up in court or convert the unbelievers – even with the best of the stuff, people just have to take your word for it that you didn’t fake it. That’s part of why I hate it when people ask me to analyze their photos. I don’t want to have to accuse them of faking things! But sometimes even the fact that something can be explained doesn’t mean it isn’t cool.

What do you think about the Congress Hotel today? The legends are fascinating to me. I wonder if it would be your nomination for the most historic haunted Chicago hotel, or if there is a less famous haunted hotel that you would recommend for travelers.

If the Congress isn’t haunted, no place is haunted. But as its fame as a haunted spot has grown in recent years, the amount of nonsense stories going around is skyrocketing. I think that every time someone calls and asks for the most haunted room, they just give them some random room number and then the people go online and say “room 441 is the haunted one!” This all comes out of nowhere. But it’s not like we NEED fake stories about the place; there’re plenty of stories about it already.

Chapter 3 educates us about The Eastland Disaster, which was a ship that tipped over in 1915 and killed anywhere from 844 – 1200 people. What are your thoughts about some of the residual experiences that you’ve had near the LaSalle Street Bridge?

Tough one – I’ve seen and heard some weird stuff around there, but it’s such a busy area that it’s particularly hard not to think it must have been something else. But here’s an interesting thing: the LaSalle bridge wasn’t there in 1915, but there WAS a pedestrian tunnel under the river at LaSalle. A lot of people are said to have died in it during the fire in 1871. The tunnel is bricked off now, but it’s still down there someplace.

The upcoming season of the popular television show – American Horror, has announced that their new theme for fall 2015 will be “Hotel.”  There has been some internet buzz that the inspiration for this theme was H.H. Holmes. If this is true, how do you imagine all the ways that the show will get this completely and totally wrong?

Oh, geez, I hadn’t heard that…. Holmes’ building was briefly called “the World’s Fair Hotel,” but it wasn’t a hotel in the modern sense of the word. There was no front desk, no lobby, no check-in times, no nightly rates. It was more short term apartments. The third floor was added specifically for use as world’s fair flats, but I think the main idea was that it gave him a reason to raise money from investors. Most people in that building lived there for months at a time, I’m not sure much was EVER done on the third floor. It wasn’t structurally very sound.  People tend to get just about everything about Holmes wrong; the story we hear about him now is sort of taking all of the wildest theories tabloids could come up with at the time and assuming they were all true. And it got pretty nuts. He’d been out of the building for a year and a half when they started investigating, and there were a couple of weeks where they were just saying “We found some rope – was he hanging people? We found a board with a nail in it – was THAT how he did it?” It was out of control, really. The whole idea of him preying on Wold’s Fair victims came from one offhand line in a New York paper. It was just a wild theory of what he COULD have been doing.

What is your favorite place to take travelers to and why (both paranormal travelers and tourists in general visiting Chicago)?

The Congress is a fun one – even putting all the paranormal stuff aside there’s history in ever nook and cranny of that place. They’re not as apt to give me the run of the place as they used to be, though. As business has picked up (and the number of people asking about nonsense ghost stories has increased) they’ve gotten less accommodating. But I can still usually show people the ballrooms. I also like to show off places like the law library high up in the Daley center, the old swimming pool in the Intercontinental, and the old mansions down on Prairie Avenue.

What is the most over-rated sort of tourist trap of Chicago? Where do the locals like to eat?

Navy Pier. I’m never sure what the point of that place is; it’s just a little off-site place to keep the tourists. Locals don’t generally go to places like Hard Rock Cafe, Rainforest Cafe, etc.  Everyone gets their own favorite neighborhood spots after a while. I like a place called Pie-Eyed at Chicago and Milwaukee.

Do you consider yourself a paranormal enthusiast, ghost hunter, or a folklorist (or what term do you think is best if you even identify with a label?!)

I usually prefer “historian who specializes in places that are supposed to be haunted.” I’m always afraid to say “ghost hunter” because then people imagine me running around in old buildings shouting “Come at me, bro!” And I’m pretty skeptical about paranormal or supernatural explanations for things – these things usually turn out to be something else, and I know that very well, even though it doesn’t keep me from having fun on investigations. I’m fine with letting my imagination run away with me in the heat of the moment.

What were your biggest challenges in writing this book? Looking back, how was your experience with the publishing process, and what have you learned over the years about publishing and marketing?

Trying not to ramble, if I remember right! It’s been a while since that one, really. I haven’t even been with the tour company in the book in years now. But it was a fun one; it was my first sign of just how much easier nonfiction is to promote than fiction. I’ve learned that repeatedly. I mean, I had a book about silent film production in Chicago out through a university press last month. It got more press in one week than my last three novels combined.

Take us through your writing process for a non-fiction book. (Do you write by hand or always type? Do you keep a writing schedule? Do you have a certain number of drafts you complete before turning in final copy?)

Hand write? How old do you think I am? Haha. I type and type. I usually get up in the morning and go right to the coffee shop and write until I’m done. Then I work at my desk at home in the evenings. With nonfiction there’s a lot more research in the middle.

Tell us how to keep up with you and about your upcoming projects/happenings.

Your best bet is probably the Mysterious Chicago blog – http://www.mysteriouschicagoblog.com