I am very excited about Ryan Dunn’s book that is coming out in March 2015. The book is entitled Savannah’s Afterlife: True Tales of a Paranormal Investigator. In addition to being an author and paranormal investigator, Ryan also operates Afterlife Tours in historic Savannah, Georgia. He was kind enough to let us tag along on an 8:00 tour last Friday night. 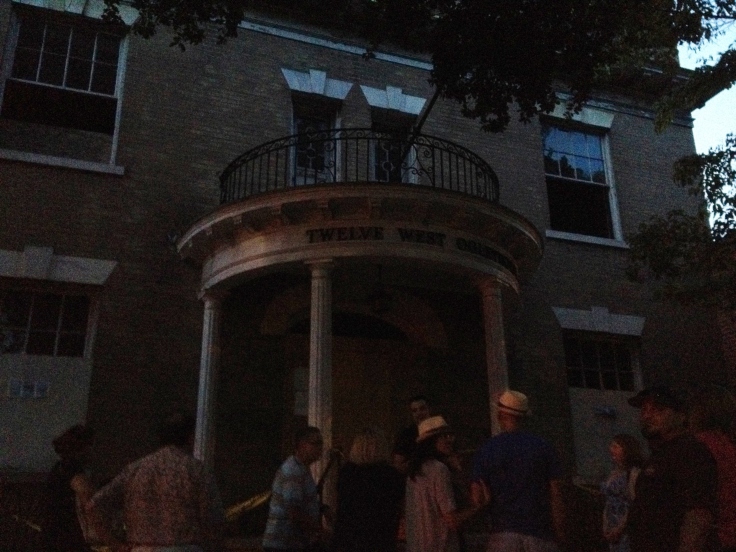 I have heard many various stories about the home, but Ryan’s tour is unique in the fact that he has not only personally investigated each location, he has actually done extensive research with the Georgia Historical Society and other sources to tell the truth about the history of the locations. He is not just standing on a corner spouting recounts of local legends. He’s telling visitors what the documents actually show. I respect that a lot.

The other unique characteristic about how he runs his tours is that he shares evidence that he’s personally collected during investigations. You may see a combination of photographs, videos, and hear Class “A” EVPs.

Ryan has been featured on A&E’s My Ghost Story.

Any dream locations to investigate?
My dream locations would be 432 Abercorn Street here in Savannah, Waverly Hills Sanitarium in Louisville, Kentucky, and the Winchester Mystery House in California just to name a few.

Can you talk about the pilot you are filming at Central State Asylum in Milledgeville, Georgia?
The upcoming investigation in Milledgeville will be a filming of a pilot for a new paranormal show based here in Savannah that we will be pitching to national networks as part of a 5 episode package. We intend to embody the flare of Savannah itself and the fact we live in the paranormal hotspot of the United States. Not only do we do investigations, but we live this day to day.

Any plans for a second book?
I am currently conducting research for a sequel, and intend to began writing that one this fall.

Thank you to Ryan for having us out. I am particularly interested in getting an update about the Central Asylum investigation!

In America, the South holds a certain mystique. Whenever I meet someone who has never traveled in my section of the world, they invariably conjure up images in their minds of old plantation homes with Spanish-moss covered oaks lining the drive, gentlemen and ladies who entertain on front porches, the eccentric aunt who lives upstairs, and a slower way of life.

While these stereotypes may be true in many instances, there is another one that carries even more weight when discussing characteristics of the South. Savannah, Georgia has been named One of America’s Most Haunted Cities by U.S. Today. As the city grew, it built upon its dead.  Houses and commercial buildings were constructed right over burial grounds, and when people renovate it is routine to find human remains in the ground. The local courts ruled in the 1950’s that having a ghost in your house is a structural defect, and sellers must list paranormal activity in their Disclosure Statements. The below list discuss some of the reasons why Savannah is known for being so haunted.

Colonial Park dates back to 1750. In 1820, Yellow Fever struck Savannah, and it is estimated that more than 700 victims are buried in this cemetery. Even more disturbing, during the Civil War, Yankee soldiers set up camp within the gates of the cemetery, and even inside the mausoleums.  Many graves and headstones were desecrated, and today you can see where random headstones have been placed against the back wall because it is simply impossible to establish where the original gravesites were (Link 1). One of the most popular local legends is that of Rene Asche Rondolier. Rene was born in 1777, and was over seven feet tall. He was known for killing animals around the neighborhood. When this came to light, his parents confined him on the property. However, soon, two mutilated bodies of young girls were found near the family’s property (now the cemetery), and Rene was found hiding in the tunnels below ground. Even after he was killed by the townspeople, two more children and one woman were later found dead. Rene’s ghost was blamed for these deaths (Link 2).

Juliette Gordon Low Birthplace:
Savannah is the birthplace of Juliette Gordon Low, the founder of the Girl Scouts (link 3). The house is open for tours, and staff members have reported hearing piano sounds and have even seen apparitions. As I wrote in one of my personal blog posts, “Margaret Wayt DeBolt wrote Savannah Spectres and Other Strange Tales in 1984, and the tour began because of her and her fantastic book. As an aside, my favorite story in the book (and about haunted Savannah so far) is the one about Nellie and William Washington Gordon, II, who seemed to have a love that even death could not interfere with. As Nellie lay dying, her children who were in attendance were reported to say “when she died, her face took on the radiance of a bride, going to meet her bridegroom.” The family butler was said to report, through a face streaming tears, that he saw the General appear, and that he came to fetch her himself.” (Link 4)

William Kehoe’s 1892 Renaissance Revival home looms five stories over Columbia Square in downtown Savannah. Many family members died in the home, and as early as 1937 it was being operated as a mortuary. The home was owned by Goette Funeral Home during the 1950’s and 1970’s. Football great Joe Namath was the last private individual to own the home. There are many stories on the internet and even in some books that tell the tale of two Kehoe girl twins who perished in the home while playing in a chimney (Link 5).  There is a commemorative decoration in the chimneys on the main floor that is said to corroborate this story. During my personal overnight stay in the house, I asked a bellman about the stories. His reply?  “It’s not haunted.  There are two children, and they live here.  This is their house.” I interviewed Tara Kehoe Ryan on October 26, 2013, and she confirmed that two of the Kehoe girls passed away in the home at very young ages, but they succumbed to Roseola, and passed within days of each other, not while playing in the chimneys. For more history about the Kehoe family and their historic home, please see Carol Ann Causey’s research paper (Link 6).

Oatland Island:
Today, Oatland Island is a wildlife preserve and favorite field trip destination for local schools. While visitors walk the wooded trails, they will come across random abandoned buildings and old towers. In 1927, the main building was a hospital for The Brotherhood of Railroad Conductors. The 1940’s brought a syphilis outbreak, and locals (including children) were brought here. Somewhere along the way, rumors persisted of the government running secret tests on the patients. (Link 7)  For more information about the history and hauntings of Oatland Island, please see Shannon Scott’s short film (Link 8).

Old Candler Hospital:
Originally built in 1808 as a poor house and seaman’s hospital, this building claims to have its share of haunts inside. But perhaps the biggest attraction it holds is actually underground. The Oglethorpe Tour Company was the only company in town that held a license to take tours down into the morgue tunnels below the old hospital (tours currently suspended while construction is taking place on the new Savannah Law School) (Link 9). The tunnels are the subject of much speculation by locals. Tour guides tell tales of autopsies being performed underground, as well as claiming that the tunnel was used to carry victims of the Yellow Fever out of the hospital without drawing the attention of the public to the epidemic (Link 10).

The “Herb House” which adjoins the restaurant is said to be the oldest house in Georgia. The old wooden restaurant is dark and maintains the perfect old seafaring atmosphere. It is not hard to picture a room full of sailors drinking rum after arriving in Savannah’s harbor in the late 1700’s. Captain Flint, the famous pirate in Robert Louis Stevenson’s Treasure Island was reported to have died upstairs (Link 11). The tunnels (one of which is prominently displayed – yet roped off) reportedly lead underground to the Savannah River, where many men were shanghaied after a long night of drinking. (Link 12)

When you check into the luxurious Marshall House you may not have ghosts in mind. But visitors and staff insist that Union soldiers remain from the Civil War days when the property served as a hospital. (Link 13) The Marshall House even topped Fox News’s list of haunted getaways. (Link 14) While on a recent tour, my guide informed us that during renovations, the Marshall House was one of the famous locations that unearthed some of those pesky Civil War human remains that people have been finding all over the historic district.

This is the home of Savannah’s best ghost host. James Habersham, Jr. built the home in the late 1700’s and reportedly is still hanging about. Women are advised to avoid the restroom in the tavern downstairs. This is because of so many people experiencing getting locked in! Ghostly children are blamed for these tricks (Link 15). James has been seen and experienced by staff and visitors alike. He will light candles, straighten table linens, and has even shared a toast with a guest (Link 16). A tip for travelers trying to sneak out on the bill by feigning terror in the restroom:  the bartenders are on to you. You will surely be caught.

Most of the ghost stories around Savannah are harmless in nature. Over at Moon River, the experiences tend to run a little darker. The Manager reports being pushed and shoved, has had bottles thrown at him, and has seen silverware thrown from the tables. He has also seen women walking up and down the stairwells (Link 17). One of the most interesting videos I have ever seen is of “Toby,” the entity purportedly captured on video lurking around a pool table in the cellar. A full body female apparition has also been witnessed walking up to the bar by multiple people simultaneously. The Brewery is in the same building as the former 1821 City Hotel. (Link 18)

The 1790 prominently advertises the spirit of Anna. They even (in good fun) have a replica of her spirit displayed in an upstairs guest room 204 by the window so passersby can see her. (Link 19) The truth of Anna has turned into nothing but rumor now, but the sad tale is one of heartbreak when the young lady was betrayed by the love of her life, who was a visiting sailor. She either jumped off the roof or was pushed to her death (Link 20). Whatever the origins of the story, guests keep leaving comment cards that reflect a presence is sticking around 1790. The most common guest comments? Well, they are from couples who report that the female has experienced something. Perhaps Anna is still bitter after all this time and is working diligently to prevent other people from being happy in their relationships.