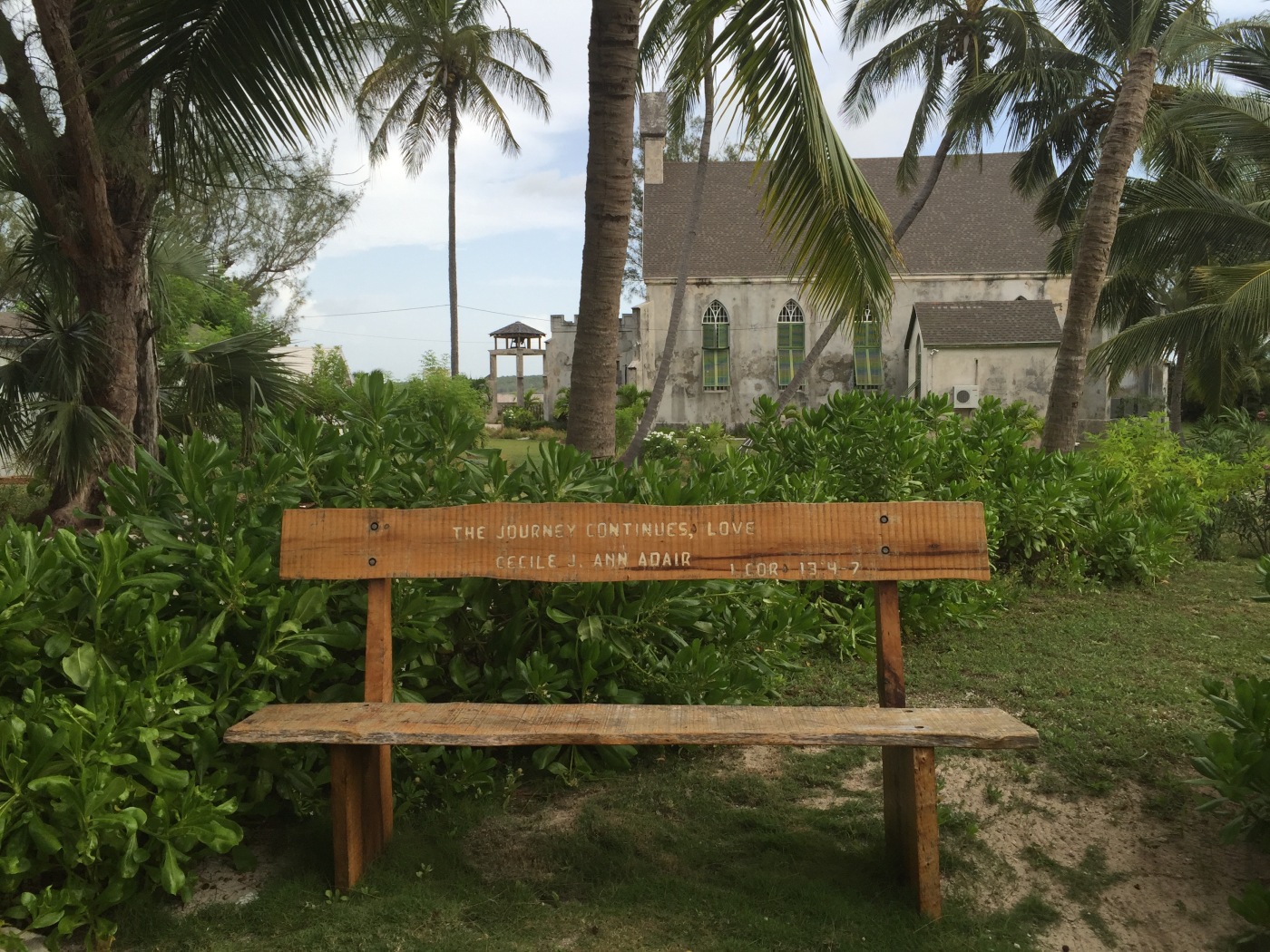 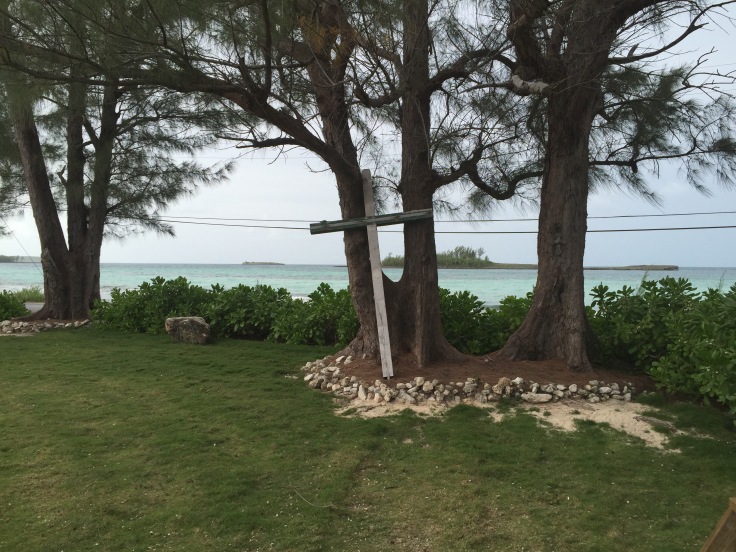 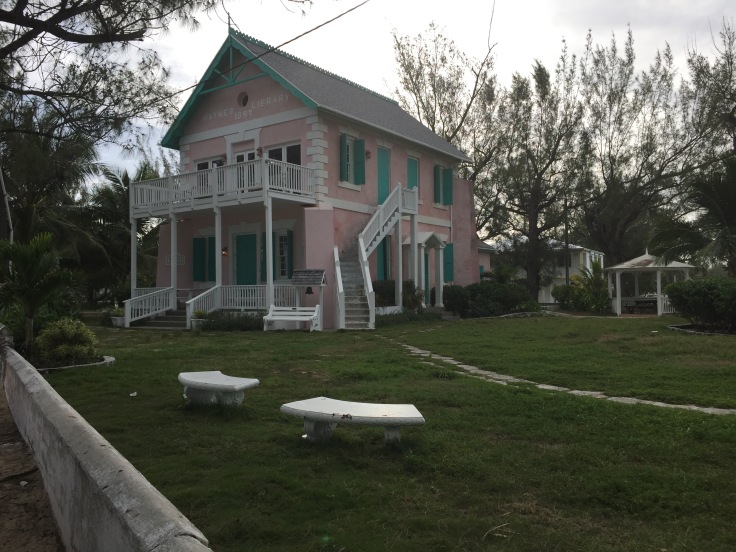 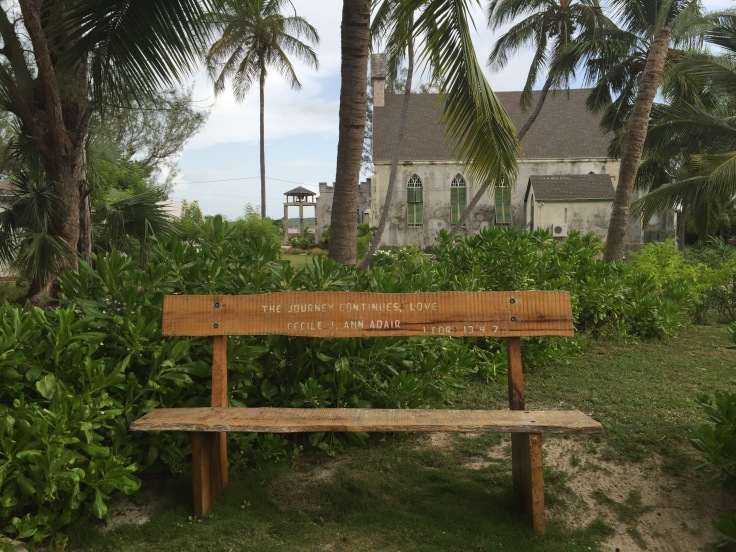 Our travels are also record in our “Play” Journal by Stealth Journals. “Play” is an indexed book journal from Stealth Journals that should be used to record all of your good times!

Who knew such a beautiful bike trail exists about an hour outside of Savannah?! Well, we do now. 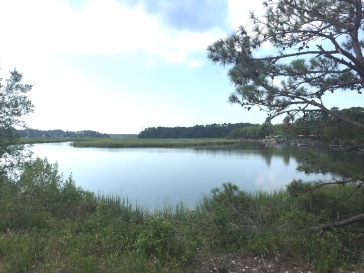 Inside the old barn: 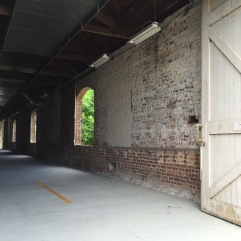 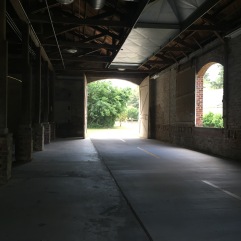 The ruins of the Old Pickle Factory: 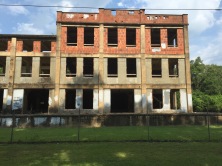 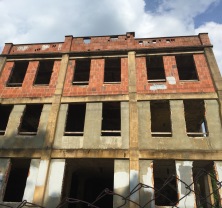 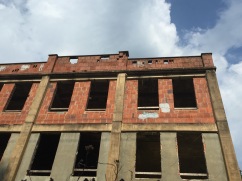 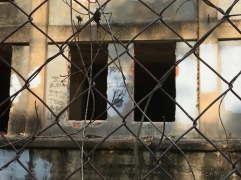 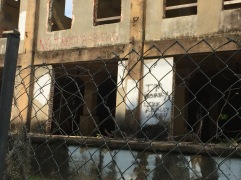 End of the line: 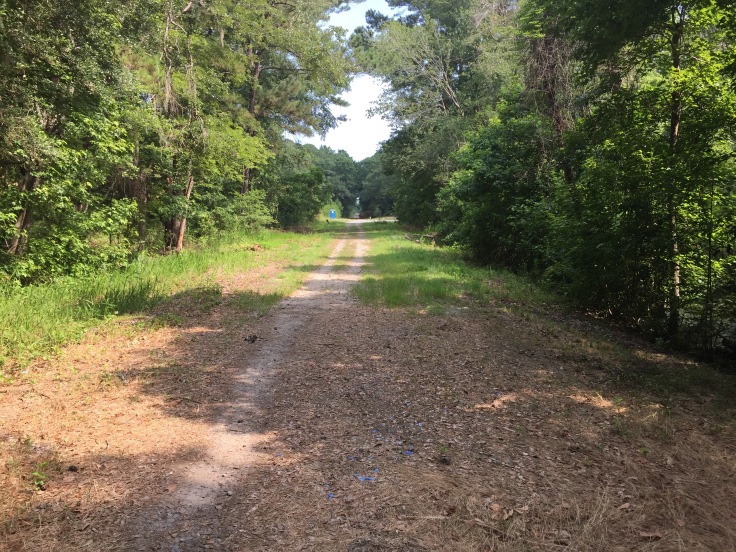 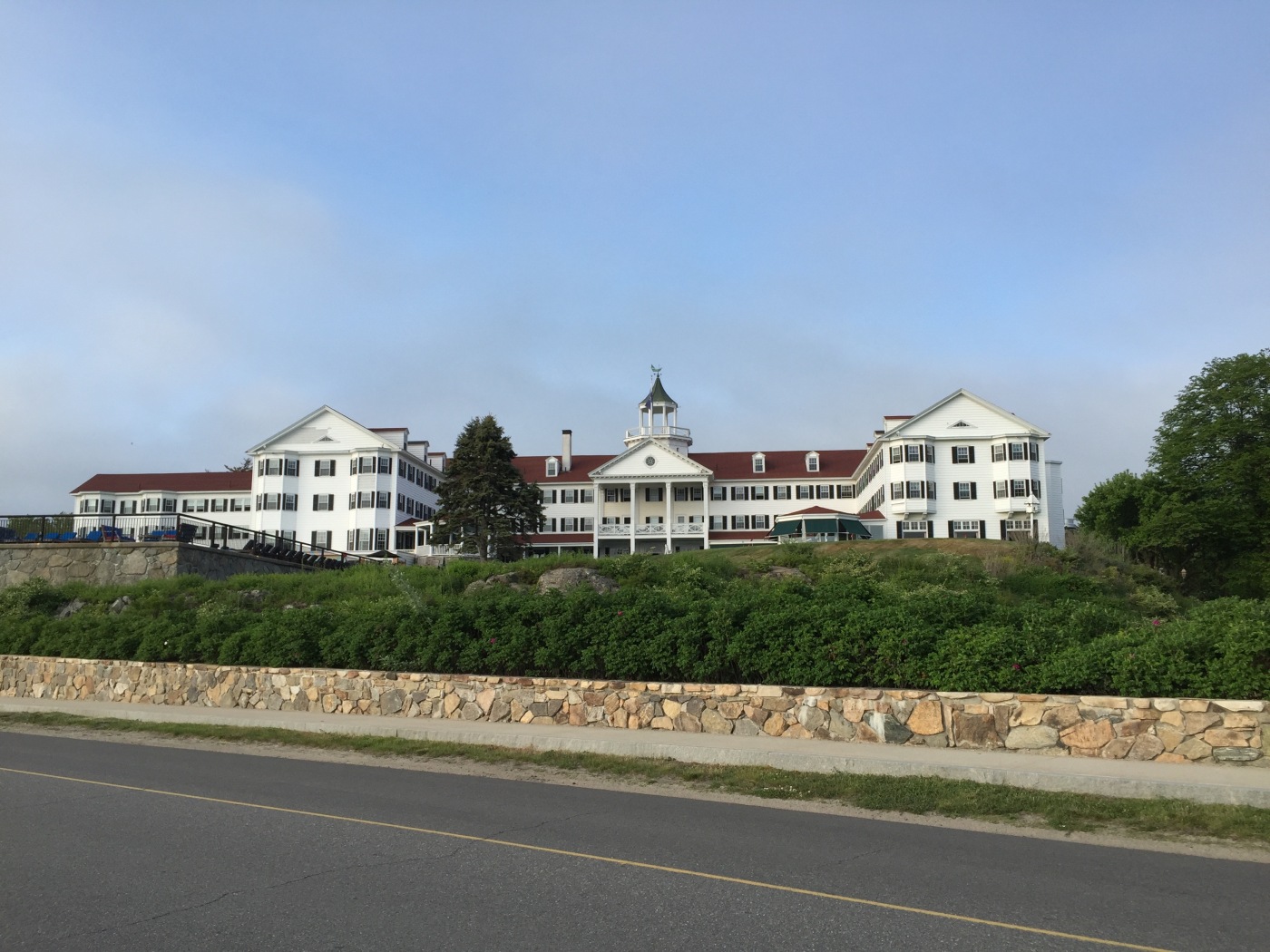 Well, no one told Maine that it was summer, because I just left and it was about 60 degrees up there. Refreshing, though! And it smells sweet. You can use your pretty words to trick the tourists into seeing Savannah in the summer, but we all know what it is if we are being honest with ourselves:  stinky, sweltering, and buggy. Yeah, I said it. But I digress.

Also, even though Tybee Island and Savannah are obviously right on THE WATER, our seafood has never tasted as good as the lobster roll that came out of this shack here.

Kennebunkport is a touristy little spot with plenty of shops/restaurants/galleries, and I imagine it gets very crowded, very fast. We killed a few hours there when the beach got too cold. Check out the locks of love bridge. I guess you two crazy kids are supposed to write your names on the lock, and then throw the key into the ocean. What a bunch of assholes.

Luckily, if you like to hunt ghosts at night in historic properties, and lounge on blue blood beaches by day, Kennebunkport may be just the spot to spend a long weekend. Don’t tell them I sent you, because some of these places are straight up lips sealed about their ghosties. Pictured below is the Tides by the Sea, which sits on Goose Rocks Beach. The cat is officially out of the bag on this one, since Frances Kermeen wrote about her stay in 2002’s “Ghostly Encounters.” At the time, the building was known/operated as the Tides Inn-by-the-Sea.

Emma, the former owner of the 1899 hotel (known back then as The New Belvidere), is said to haunt the building, particularly Room 25. In her time, she hosted such guests as Sir Arthur Conan Doyle and Theodore Roosevelt. According to Kermeen’s interview with the former owners, Emma notoriously had a habit of causing trouble for ill-tempered men who checked into “her” Room (No. 25). 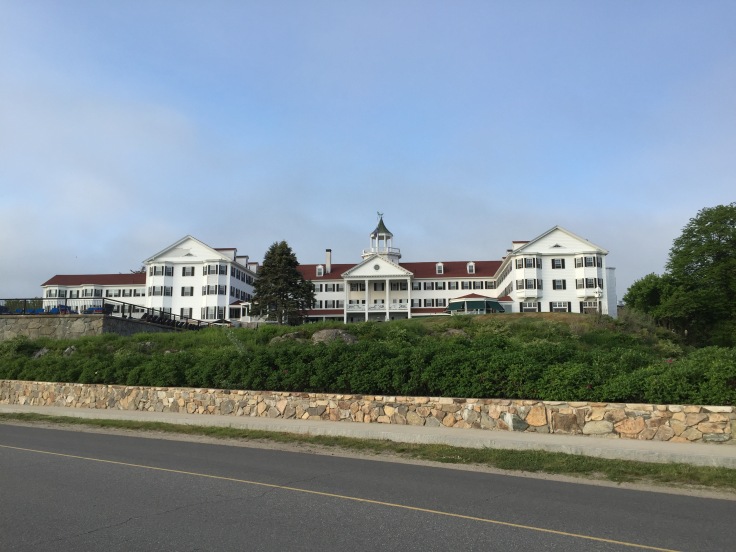 The Captain Lord Mansion has claims associated with it that involve a female apparition walking through the Lincoln bedroom.

The Breakwater Inn is situated right off the river (flowing from the ocean) into the port. The hotel is in an interesting position to watch for ghost ships.

The Captain Fairfield Inn is one that may have a spirit or two, but as of 2013, the owners were NOT open to exploring or encouraging that line of questioning. Still, reports persist. I have several books in my library that cover this house. The lady doth protest too much, methinks. 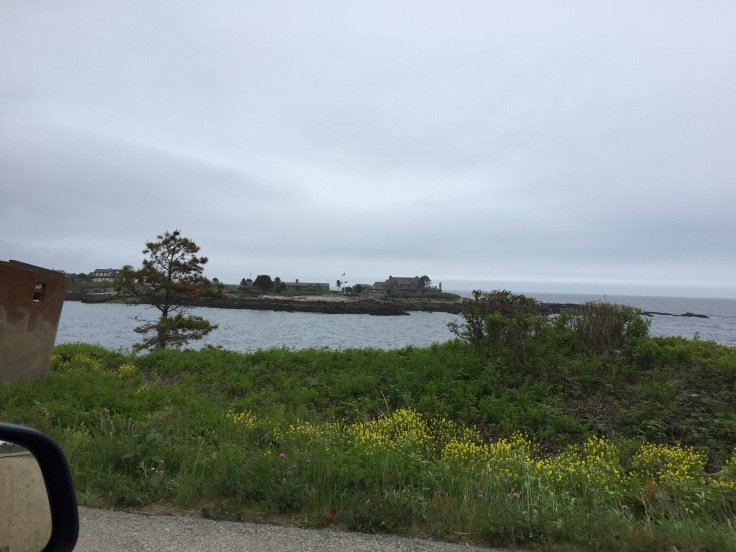 As always, our travels are kept in an analog version as well. We use “Play,” by Stealth Journals. Play is an indexed book journal that should be used to record all of your good times!

The Swamp Rabbit Trail in Greenville, SC, is a multi-use trail that is about 21 miles long. Bob and I saw it via bicycle. Our preference was to start at Travelers Rest, pass Furman University, and end at Falls Reedy Park and the Clemson campus. Then, pedal uphill to Main Street and find a cup of coffee before turning back around. 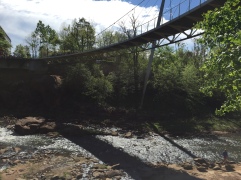 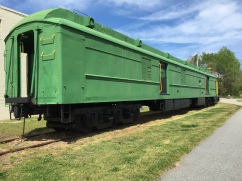 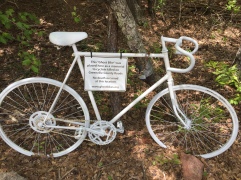 For the paranormally inclined, you may want to stay at the Westin Poinsett, which has been written about in Jason Profit’s “Haunted Greenville,” and just also happens to be centrally located, with easy trail access so you can park onsite and ride to the trail.

Can You Spot the Stealth Journal?

It was a trick question! There are two secret diary Stealth Journals. “Large Plans” and “Adventures of Chuckleberry Chinn.” For when your notes need to blend in to the background. Head on over to Stealth Journals and buy a few! 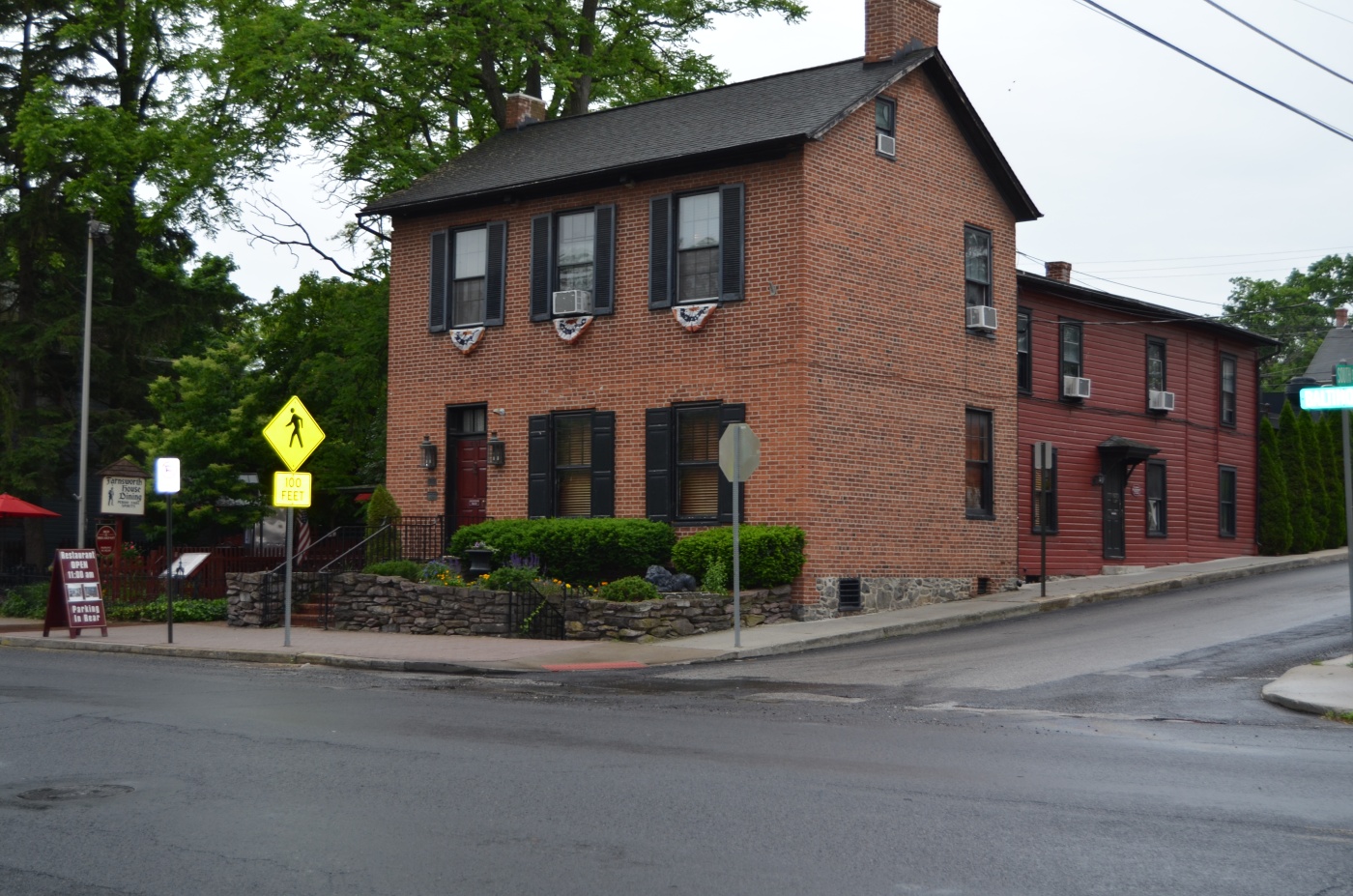 Bob and I stayed at the 1810 Historic Farnsworth House Inn in Gettysburg, PA over Memorial Day weekend in connection with our upcoming book with Llewellyn (“America’s Most Haunted Hotels: Checking in With Uninvited Guests”).

The history and hauntings will be addressed in the book, but for now, follow me into the house and downstairs into the depths of the basement. 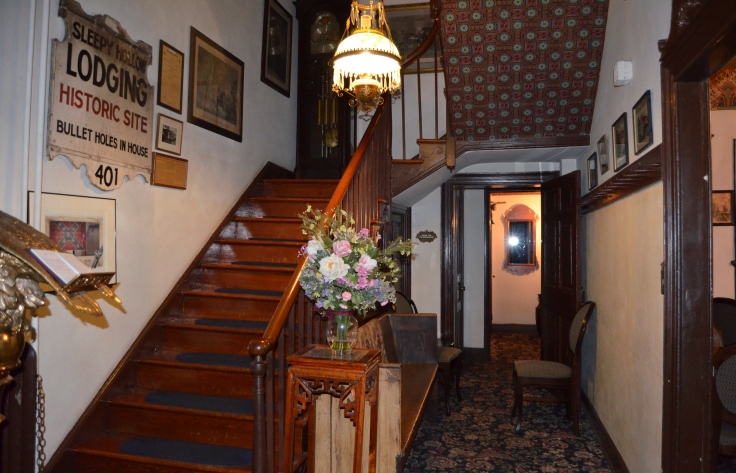 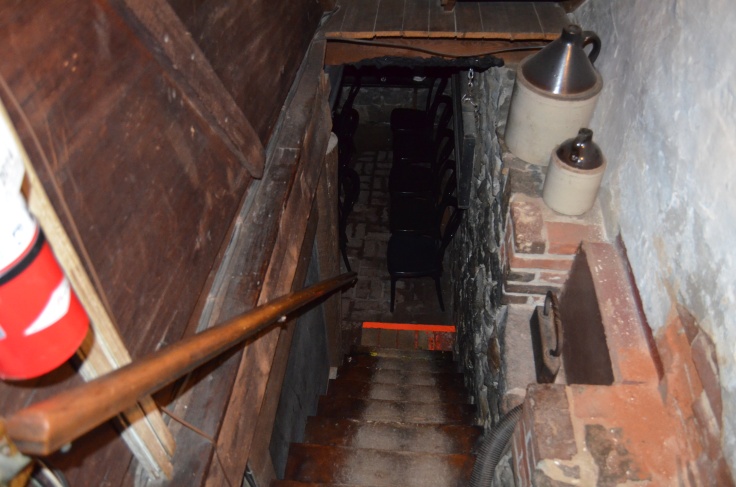 The Mourning Theatre is held down here (stories told by candlelight). 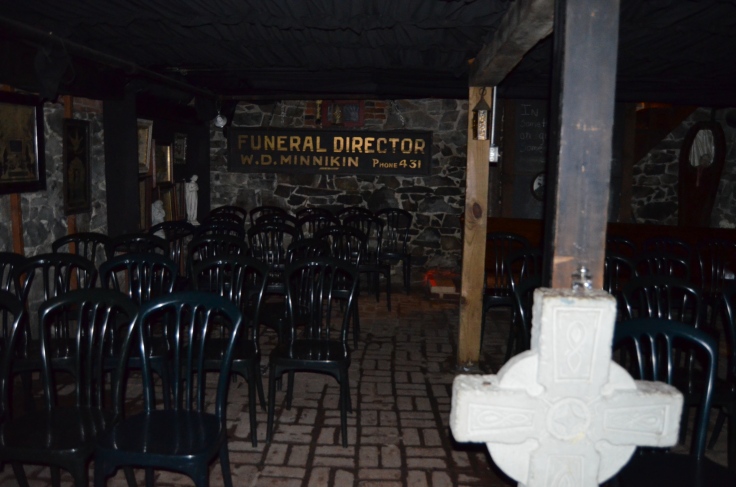 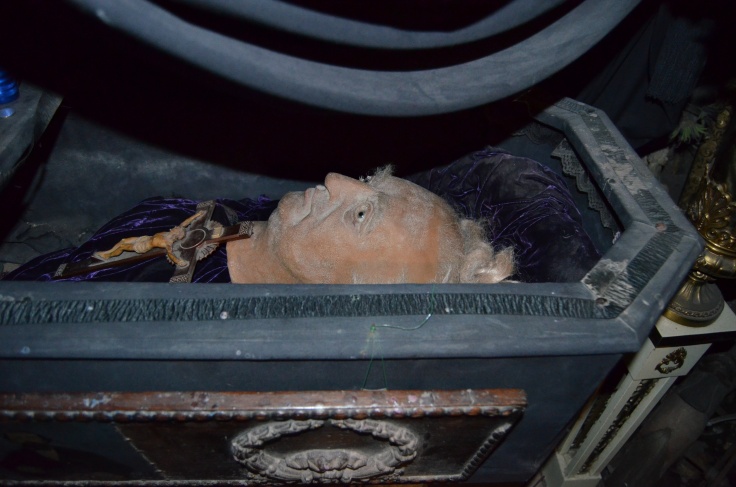 There are many original artifacts from the Victorian Mourning Period in the basement, including these hair wreaths, pictured below.

Traditionally, when a relative died, a surviving family member cut off a piece of the deceased’s hair and sewed it into the family wreath and hung it on the wall like that was a totally normal piece of art. This was a way for the family to remember their loved one, and especially so if they could not afford the expense of photography. The Victorians were also fond of using the hair in jewelry. I have no idea what sort of weird residual attachments might go along with having that amount of strange, dead, human hair stored in one place that has so many deaths and tragedy connected to the sight. It is worth considering though, when you think about the reasons for the hauntings.

After all that darkness, we headed for the light of the battlefield. It was a haunting place, but peaceful just the same.

A Visit to the Indiana Medical History Museum

The 1896 Pathology Building is just about all that is left of the former Central State Hospital in Indianapolis a/k/a The Indiana Hospital for the Insane (Circa 1848 – 1994). The two-story building has been preserved as a museum. Admission is just $10.00, and includes a one-hour tour that is highly informative, enjoyable, and tastefully macabre (if that is a thing – I kind of just made it up, but I think that phrase sums it up perfectly).

The museum carries a warning to the public: “Young children and visitors sensitive to topics such as mental illness, death, and autopsy may find the museum disturbing. Human skeletons and preserved organs are on display at the museum.”

Our tour begins in the teaching amphitheater. In its day, the facility was cutting edge, and doctors were diligently working to discover the causes of psych conditions and diseases (dementia / depression / schizophrenia).

Autopsies were performed and organs were kept to be studied. 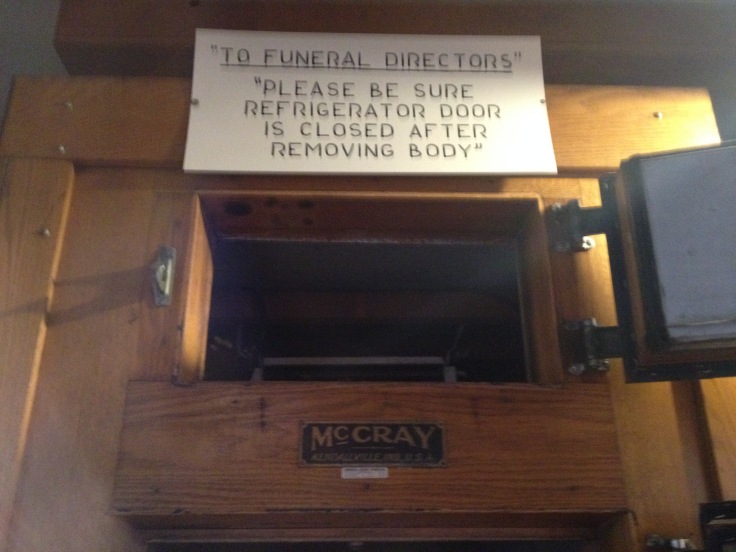 The Anatomical Museum and a lab room. There is a skylight above the marble table because it provided the best light for dissecting. 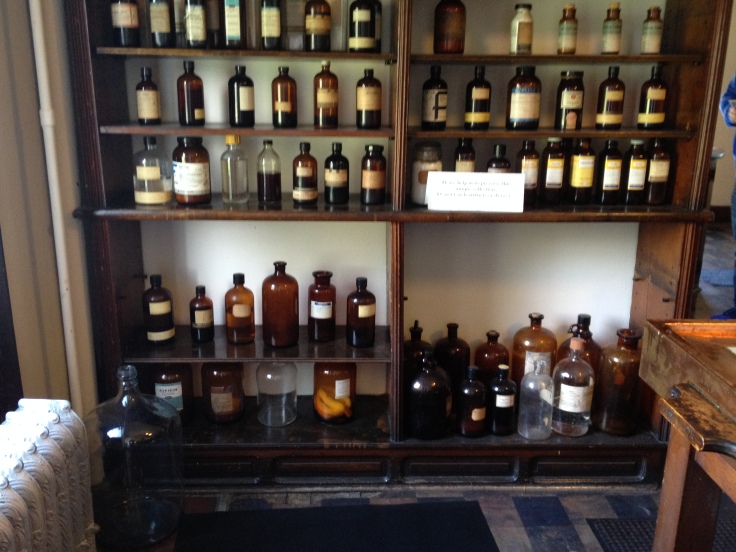 I could have spent hours in the library, but the books are fragile, and off-limits. Don’t all of those “American Journal of Insanity” volumes from the early 1800’s look fascinating?! 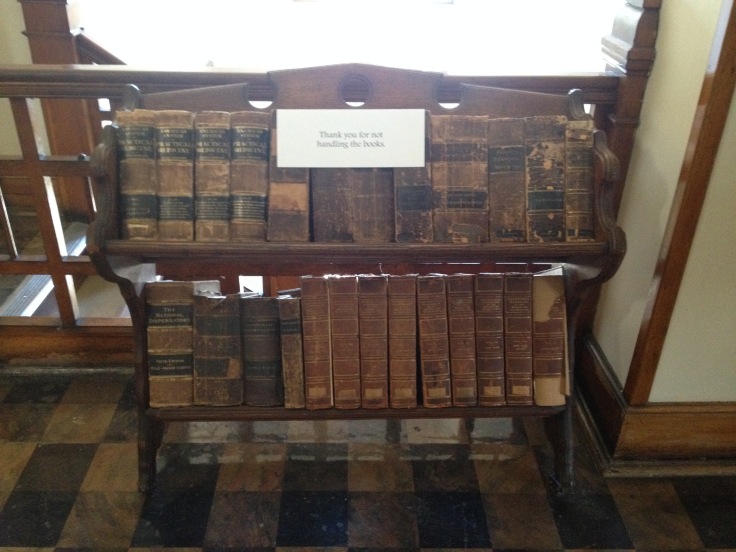 Even if you do not have any medical background whatsoever, you can appreciate how far we have come in just 100 years.

The Galloping Hessian of the Hollow

Sleepy Hollow is only about 40 minutes outside of Manhattan. Made famous by Washington Irving, it wasn’t even called Sleepy Hollow until 1996, when GM closed a plant in North Tarrytown, and citizens elected to get smart and re-brand. Dig the horseman icon at the top of the street signs. Brilliant. 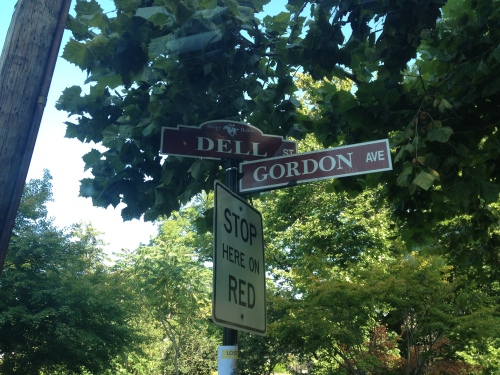 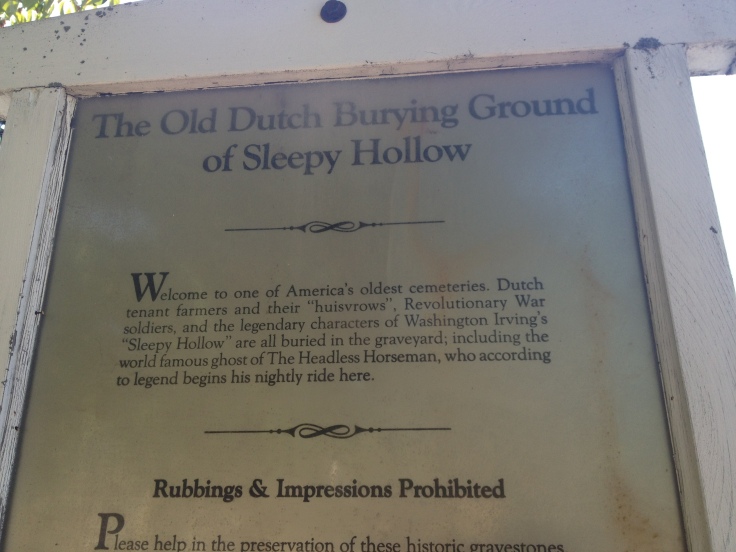 The Cemetery is still there, of course, as well as the Old Dutch Church. As we were walking the grounds, I think I just might have stumbled upon the grave of the Hessian.

I mean, who else would they want to keep locked up?!

It was not hard to imagine (even in the light of day) the Hessian beginning his ride out of that grave, and trotting down the hill. All the graves are lined up, facing this path, as though they are cheering him on while he rides. 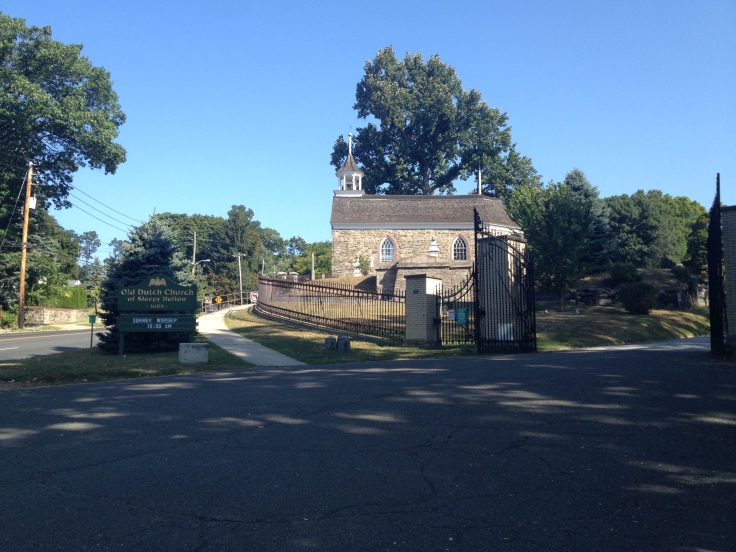 There is not much of a bridge left at all. More of a site-marker.

I found a weathered and slightly yellowed copy of Washington Irving’s The Legend of Sleepy Hollow after we got home from our Labor Day trip to New York. You really owe it to yourself to sit down one of these few remaining October nights and read the story (by firelight, if at all possible). The language is just fantastic. The story has stood the test of time, and it remains today one of the very best scary stories I have ever read.

“There was a contagion in the very air that blew from that haunted region; it breathed forth an atmosphere of dreams and fancies infecting all the land.”

Llewellyn ran my article about the Old Charleston Jail yesterday. The full article can be viewed here: http://www.llewellyn.com/journal/article/2510