New Year’s Day 2013 and Bob and I were driving from Sedona to Bisbee, with a stop in Tombstone. We passed through Tucson (and would be coming back through for our last night in Arizona).

Like every good ghost hunter, I had marked the 1881 Birdcage Theatre on my list of must see stops. We did not do any hunting there, this was a straight tourist stop during business hours. We were met by a weirdo woman who totally creeped us out at the cash register. The main area of the museum is nicely preserved, but the place reeks of sadness and dusty desperation. (I think this is an accurate portrayal of what it must have actually been like when it was brand new and serving it’s purpose, by the way). The basement area that holds an old gambling table and some more cribs is downright haunting. It would not be hard to imagine ghosts rambling around this basement when they shut the lights off for the night.

I wanted to like Tombstone. I was excited to travel there for the first time. However, my impression of the town is that it is what Disney would contrive to preserve an old Western town. I saw Boot Hill Cemetery and it made me feel dirty, as though I were guilty of exploiting the dead. Bob and I both turned around and got out of that place in less than two minutes. We burned rubber out of Tombstone and never looked back. 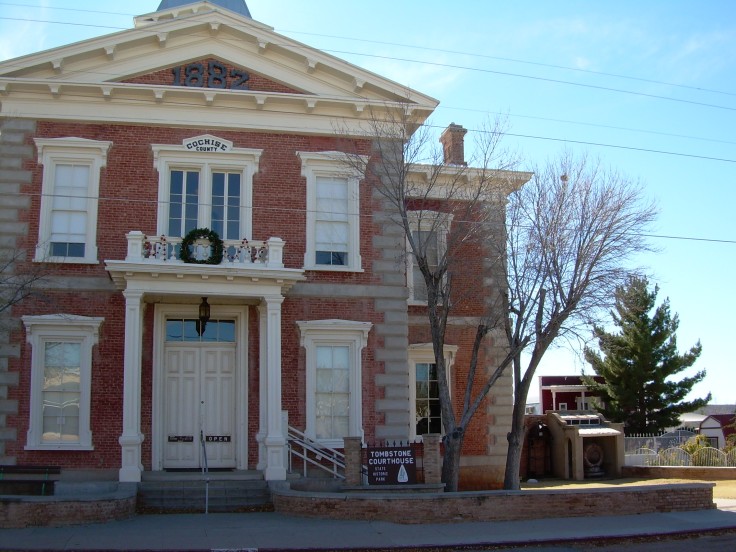 Tombstone made me wish we had spent more time hiking in Tucson amongst the gorgeous, taller than us, cactuses. 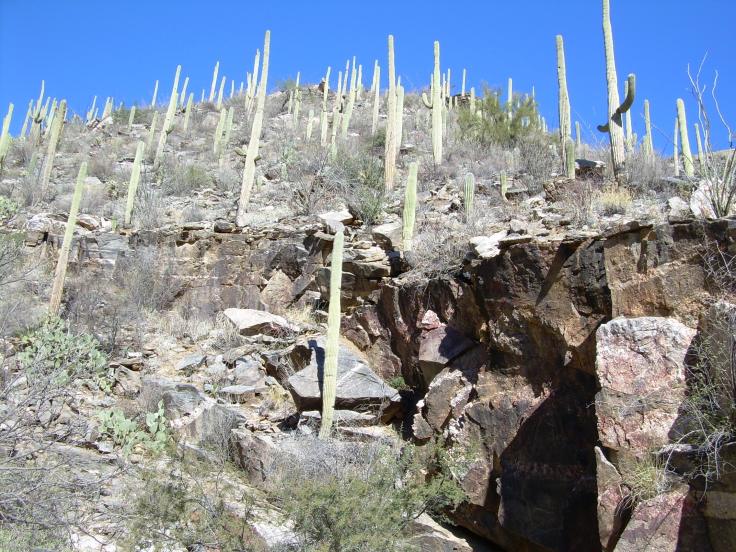 We settled in to the Letson Loft Hotel, overlooking the main street of historic downtown Bisbee. I didn’t think about all the shops and galleries being closed because it was New Year’s Day until we got here! I missed out on some good shopping, but there were a few antique stores still open so I got a quick fix, at least. I also got in a good walk and a great lower body workout while I was navigating my way over black ice traps, and I had a lot of fun picking out locations from The Great Stair Climb. The whole town is built on the hills.

I also witnessed a fantastic female drunk outside of a bar in the middle of the day just losing her mind and yelling in some language that was not quite English or Spanish, or any romance language I have ever heard, actually. I entered her line of vision by accident when I turned left at a dead end street. Except she was deliriously and dangerously drunk, so she never saw me. I stood there frozen for a few seconds, watching the drama play out before me. For a moment, I contemplated helping her. Then my roots kicked in, and I did what any self-respecting Southerner would do in the same situation: I turned and walked away. It has never benefited me to insert myself into the dealings of others.

Dinner was at the famous Copper Queen Hotel, and sadly, it was not worth mentioning.

Here’s the thing about Bisbee. It’s weird. I didn’t know why until we left the next morning, but I could sense that the atmosphere in the town was “off.” The night before, as the sun was setting and we were exploring the streets of historic downtown, I looked at Bob and said: “Something bad happened here. Something is really not right here.”

I had the Queen Mine marked on my list of things to do, but in the morning, I looked out over the town once more from our hotel room, and I didn’t want to go anymore. When we got back to the highway, I was googling Bisbee and tragedy, trying to figure out if there was a tangible reason for the way I was feeling. It turns out that in the summer of 1917, about 2,000 men were kidnapped right out of their homes and boarded onto trains that would drop them off in the New Mexico desert. The owners of the mine did it as an act of retaliation for the striking workers, and this was the largest mass kidnapping in America.

I swear this left a mark on the land.

I shivered as our car sped back to Tucson, carrying us just as fast as we dared go. And I said, in a tone of voice that could never convey what I was actually feeling on the inside (my gut-speak raw innards): “I told you something bad happened in that place. It’s time to go.”

As always, we like to index our travels inside our “Play”Journal, from Stealth Journals. A sample entry page is contained below: