I’m with her. I want to be excited about this news, but a big part of me is just saddened by it. Charles Mattingly has confirmed (http://www.wdrb.com/story/24854652/waverly-hills-the-hotel)that the fourth floor will remain intact, so that is something at least. Still, you can’t blame them for being capitalists. 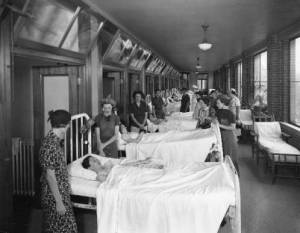 Charlie and Tina Mattingly, current owners of the infamous Waverly Hills Sanatorium, located at 4400 Paralee Lane, Louisville, Kentucky, announced plans to open a 4-star, 120-room hotel catering to the paranormal connoisseur. But would I book a room?

Major Thomas H. Hays purchased the property in 1883. He built a modest schoolhouse and hired Miss Lizzie Lee Harris to educate his children. Miss Harris christened the schoolhouse “Waverley School” because of her fondness for Sir Walter Scott’s Waverley novels. Major Hays renamed the entire estate Waverley Hills. When the Board of Tuberculosis purchased the land, they kept the name but changed the spelling to “Waverly.”

Tuberculosis (TB) was known as “The White Plague.” It ran rampant in the early 1900s and prompted the opening of a sanatorium. In its heyday, the 2-story Waverley Hills accommodated…