On our way home from St. Simons Island yesterday, we took a detour through Midway, Georgia. The first time I had ever heard of this place was from Chris Wangler’s 2006 book, Ghost Stories of Georgia. By complete happenstance, we met the last tour group of the day at the Midway Museum and were able to join in.

I loved the original civil war-era clothes that were on display upstairs. 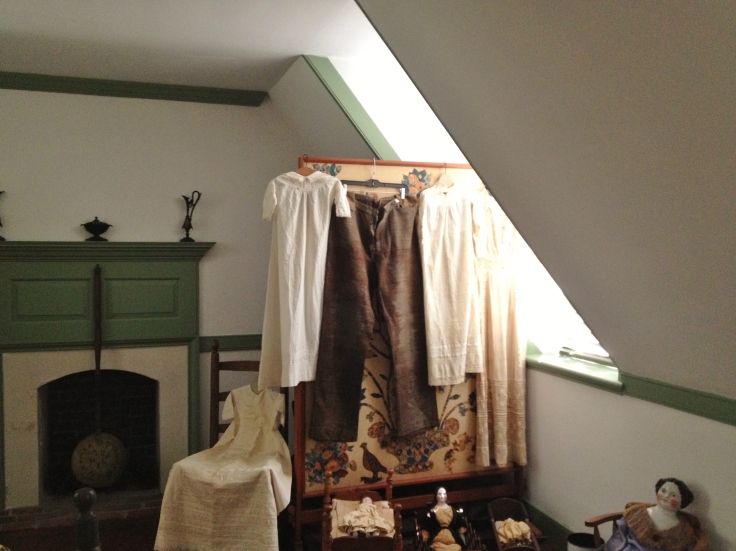 Also, check out the original key to the 1792 Midway Church:

You can’t tell by looking at this photo, but the key is huge! The tour guide used one that was very similar to let us in the church later.

According to the museum’s brochure, the exterior of the church was painted red in 1792, and the floors were painted in black and white diamond patterns. The present day appearance of the church dates to 1849. For six weeks during the Civil War, General Judson Kilpatrick used the church as a slaughterhouse and the church was abandoned after this.

The pews have their own little swinging doors for entry, and we were told that they used to be sectioned off for subscribers.

View from balcony of pulpit:

Upstairs view of right side of balcony area:

I expected the church to have some sort of feeling or smell to it, but instead the place just felt empty. Not cheerful or peaceful or even sad, or anything whatsoever. Completely devoid of emotion.

Mr. Wangler recounts two haunting tales about the Midway Cemetery in his book. The first story involves two young people who allegedly involved themselves in an illicit affair and had a habit of meeting in secret in the cemetery. Sylvia Brown was a blond seventeen year old, and Anthony was one of her father’s slaves. When Sylvia’s father got news of the affair, he had Anthony murdered. The story is that Sylvia found his body hanging from the tree in the cemetery where they used to rendezvous and slit her own throat right there at the scene.  Visitors report shadow figures underneath the tree.

View of the church from inside the cemetery: 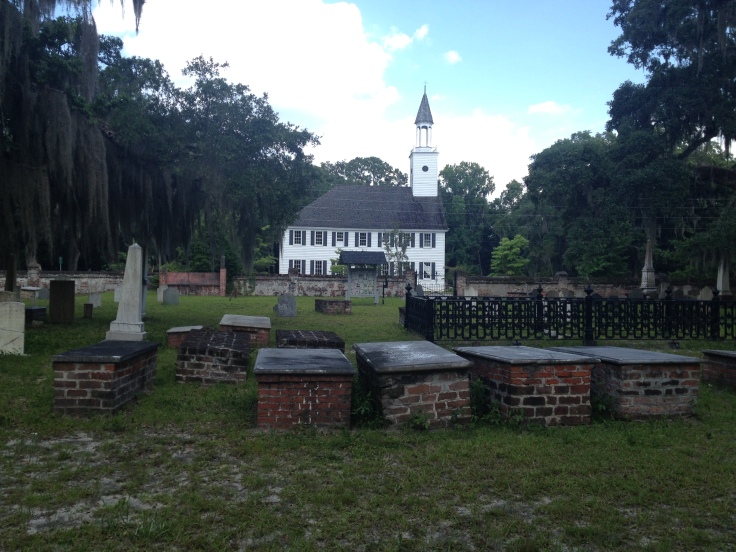 The second legend is that of the crack in the north wall of the cemetery. The wall was built in 1813 by slave labor. Two of the men had been arguing all day and had fallen behind with the day’s construction. The master made the two stay late and finish the job and one wound up murdering the other and hiding him beneath the wall. The next day he claimed his partner had run away. The wall that remained covering his crime was reported to crumble at an unexplainably fast pace. One day, the master ordered the wall torn down so it could be rebuilt from scratch. The remains were discovered, and the wall was rebuilt. But the crack continues to this day even though the wall was rebuilt.

Info display inside the cemetery:

My photo of the wall:

The cemetery felt to me exactly as the church felt – empty. It could be that the harsh south Georgia heat is stifling my radar. But, Bonaventure in Savannah has always felt very peaceful and serene to me, and I have made plenty of summer visits inside the walls of Bonaventure (I don’t mean to imply that Bonaventure is haunted, just that it does make me feel a positive energy at least).

I look forward to a visit in October, to hear some legends on the Halloween tour. The story about the crack in the brick wall is well-embraced in Midway.

Be sure to keep an analog version of your travel adventures logged and indexed inside your very own “Play” Journal, by Stealth Journals. “Play” is an indexed book journal that should be used to record all of your good times!